Manohar Shetty (b. Bombay) has published  seven books of poems, including ‘Domestic Creatures’ (Oxford University Press, New Delhi). His new books  are  ‘Creatures Great and Small’ (Copper Coin, N Delhi; 2014) and ‘Living Room’ (HarperCollins, N Delhi). In the UK his poems have appeared in ‘London Magazine’, ‘Poetry Review’, ‘Wasafiri’ and ‘Poetry Wales’. He has co-edited a special edition on English language poets of India for ‘Poetry Wales’. In the United States his poems have appeared in ‘Chelsea’, ‘Rattapallax’,  ‘Fulcrum’, ‘Shenandoah’, ‘The Common’, ‘Atlanta Review’ ‘The Baffler’ and ‘New Letters’, and in ‘Helix’ in Australia. Several anthologies feature his work, notably ‘The Oxford India Anthology of Twelve Modern Indian Poets’ (ed Arvind Krishna Mehrotra, OUP, N Delhi) and in anthologies edited by Eunice de Souza and Vilas Sarang. His poems have been translated into Italian, Finnish, German, Croatian and Slovenian.

He has edited ‘Ferry Crossing: Short Stories from Goa’ (Penguin India). and ‘Goa Travels’, an anthology of travel writings recently published by Rupa.

Shetty has been a Homi Bhabha Fellow and a Senior Sahitya Akademi Fellow. He edited ‘Goa Today’ for eight years and has worked in other magazines and newspapers in Bombay, Bangalore and Goa. He has lived in Goa since 1985 where he now edits ‘Timeline Goa’. 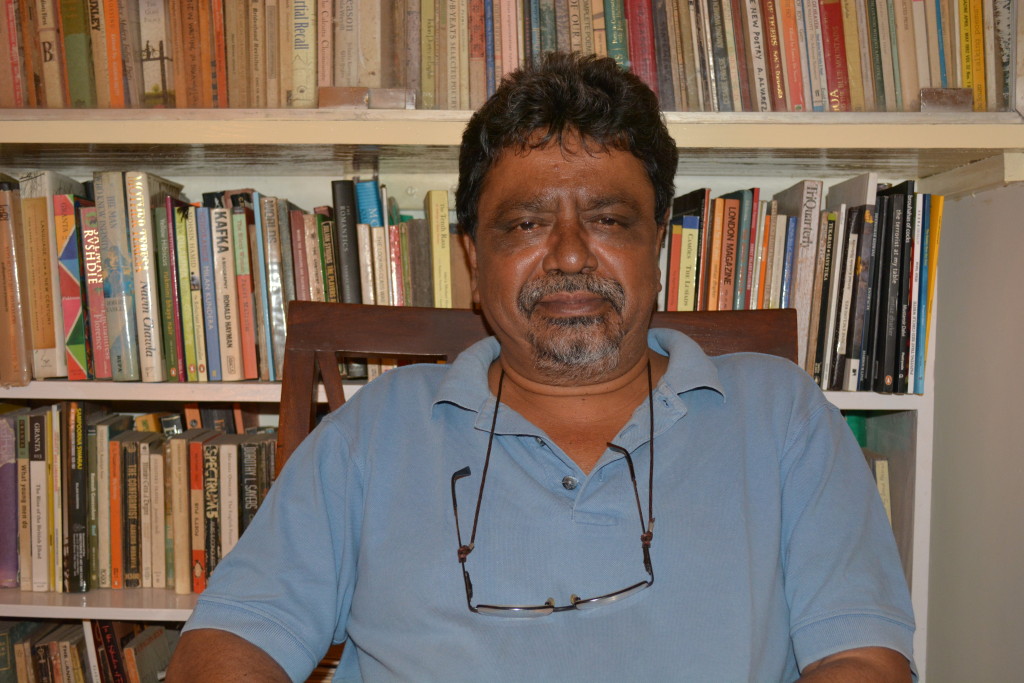 I was born in Mumbai and went to boarding school in Panchgani. I graduated from Bombay University.

I have always been a compulsive reader, reading pretty much anything that came my way in school—from the Westerns of J T Edson and the Oliver Strange series and later on in college  the science fiction  of  J G Ballard and Stanislaw Lem and the  more ‘literary’ novels of Bernard Malamud, Anthony Burgess,  Graham Greene, Evelyn Waugh, R K Narayan, Salman Rushdie and so on.  I‘ve also had an abiding interest in Dostoyevsky, Milan Kundera, Calvinho, Borges, Gabriel Garcia Marquez and of late, Patrick Suskind. I also read a lot of detective fiction—P D James, Dorothy L Sayers and several others.

What inspires you to write poetry?

When I was younger love, nature and rebellion, I suppose, but in all their manifestations.  I don’t believe in ‘inspiration’ any more. It tends to die out as one grows older. Now I take things line by line. Sometimes I even get up at odd hours at night just to write down a few lines before they disappear in the harsh light of day.

Who are some of your favorite poets?

I’ve always admired some of the  poets I discovered by myself in Bombay as a college student. These include Ted Hughes, Seamus Heaney, Norman Macaig, Douglas Dunn and Derek Walcott.  I also believe that the work of D H Lawrence as a poet remains undervalued. Among the Americans, I have admired the work of Robert Lowell, Sylvia Plath and Richard Wilbur.

What advice do you have for aspiring poets?

It’s easier to write poetry when you are young and hot blooded. Sustained work over the years is a lot tougher. You need to have the desire and the drive to continue writing poetry.  You need to love it for its own sake. There are very few publishing outlets in India, unlike in the West, and very little money in it. Besides, the critical climate is also poor and skewed. So you need to have some intellectual and emotional stamina to go on.

Early on, in boarding school,  though much more then in the area of short stories.  Poetry came later, when I read the modern, contemporary poets.

Do the Internet and social media contribute to the well-being of poetry?

I don’t really surf the net for poetry. I prefer the old fashioned book. While the net has made  a range of  poetry more accessible, it has no quality control. In a free- for -all climate, the standards are invariably lowered. Meritocracy takes a beating.

What do most poorly-written poems have in common?

In India at least, the use of dated and obsolete forms. And sentimentality.

What do most well-written poems have in common?

They are polished and terse, use contemporary speech, and freshen up language. At their best they are a perfect blend of the emotional and the cerebral.

Why is it such a difficult market for poets right now?

There has always been a difficult ‘market’ for poetry. Even in the UK, it is said  that the readership is dwindling. And in this hi-tech age, there  is an abundance of other diversions. But poetry will always survive insofar as we continue to see the world from acute angles, strive to replenish language and find extraordinary metaphors in the seemingly ordinary.

Has your idea of what poetry is changed since you began writing poems?

Not really. But yes, they don’t come in a rush anymore though my antenna is still alive, ready to pick up a signal even at the most inconvenient hours. But poetry is still a remapping of language while keeping the heart stable and running.

What aspects of your poetry reader in general and Research scholars in particular must discover and explore?

I can’t really dictate that. But I use a  great deal of ‘animal’ imagery to comment on the human condition,  and thus naturally I favour the instinctive over the intellectual. On research scholars,  I would ask them to look closely at the poetry produced over the last 50 years or so instead of constantly digging up the ancient and much too revered past.

How would you describe uniqueness of each of your poetry collections?

Each collection is different, the concerns varying with age, experience and relocations. I have lived in Goa now for the past 30 years. A little of the place is bound to rub off on me and influence my work.

Are there any new poets that have grasped your interest?

One intriguing  aspect in India is that there have been a great many young women in the field—Tishani Doshi, Arundhathi Subramaniam,  Menka Shivdasani, Sridala Swami, Anjum Hasan—all producing interesting work.

Definitely progressing—it isn’t just R K Narayan, Mulk Raj Anand and Khuswant Singh any more.  A host of new writers have come up in different genres of fiction. And poetry too is in good hands.

How will you judge the body of Contemporary Indian Writing in English in general and Indian English Poetry in particular?

With fiction, I think it is in a healthy state with so many publishers around. My only grouse is that  most mainstream publishers continue to ignore poetry completely.  One or two  publish one or two titles a year. If all did, and published perhaps three or four  new titles a year,  poetry  publication would have been on a sound footing.  And it doesn’t cost too much–a  book of poems is rarely more than  100 pages long and the print run doesn’t run into thousands.  Besides, little presses simply cannot match the distribution network and reach of commercial publishers.

It hasn’t been very much, at least not in the field of poetry. Bu I don’t think ‘popularizing’ literature is part of their agenda.