Kavery Nambisan is a novelist from India. Kavery Nambisan was born in Palangala village in south Kodagu, India, in a politician's family. Her father, C.M. Poonacha, was at one time a Union railway minister. She spent her early years in Madikeri. She studied medicine in St. John's Medical College, Bangalore from 1965 and then studied surgery at the University of Liverpool, England, where she obtained the FRCS qualification. She worked as a surgeon in various parts of rural India before moving to Lonavala to start a free medical centre for migrant labourers. Her published Books include:

On Wings of Butterflies, Penguin India, 2002. 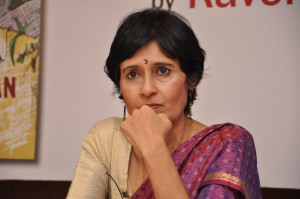 I was born in my mother’s home in Palangala, a small village in Kodagu district, Karnataka. I studied in a local, Kannada-medium  school until I was eleven. Later in Delhi and Bangalore when my father moved, on work.

Obviously, my early reading was all in Kannada, a language I love. I read our mythologies, children’s magazines like the Chandamama and a few translated works like stories from Arabian Nights. I was always precocious as a reader and read adult books when I could get them.

In Delhi, once I had learnt English, many doors were opened through the school library. At home, there was no one who read much, I think so I read whatever my father had. I remember reading a biography of General Montgomery and another of General Thimmaiah who was well-known to my parents. I read Pasternak’s Dr Zivago and Maugham’s Of Human Bondage, some of Pearl Buck and a collection of salacious short stories. And in school, Dickens, Enid Blyton, comic books. Sadly, I lost touch with my Kannada literature for a long while.

Right now I am reading several books. Samuel Butler’s The Way of All Flesh, Lampedusa’s The Leopard, Kipling’s Kim – they are eternal favourites that I like to read often. My husband recently found an excellent book of short stories, On Doctoring, published in the ‘90’s. It is a treasure to savour slowly.

I read all types of books, particularly good-quality thrillers and humour. I like the classics from any part of the world.

Favourite authors! There are too many of them. Kipling, Robert Graves and George Orwell are up there as some of the best writers in the English language. There is much to learn from them and from the best poets, from Shakespeare, from good playwrights like Girish Karnad and Tendulkar. I am strongly influenced by my rural background and my language base in Kannada, even though I don’t write in Kannada. The reason of course is that English has become the language in which I can express myself best. Also, it has a stretchable vocabulary that I can exploit to say what I want to.

Being a surgeon, I don’t have much spare time to speak of. I do house-work, some basic cooking (not very good!), I read and go for long walks. But my best form of leisure is to sit around doing nothing; or have an intimate conversation with a friend over tea-coffee. Nothing to beat that.

I’m hesitant to offer advice because every writer, like myself, has a lot of learn. But my way is to write honestly and clearly, without being self-conscious; to read widely, with a critical eye and when you discover good writers, see how they do it; learn to read your own work like a reader and editor and revise as many times as required. If you are serious about being a writer, you need to be persistent and stubborn, have a good measure of humility and humour.

I don’t know of any such epiphany. I always loved words, stories and the way language can be used. Now I know that doctoring and writing are the two things I am passionate about.

I’m hardly the person to comment. I use internet for emails only and the computer to write. I’m not savvy with the internet, smart phones etc and have no particular desire to improve my skills. However, I may be forced to do so and then I will do it, with some reluctance.

I wouldn’t be so presumptious as to advise either.

A Town Like Ours speaks in the voice of Rajakumari, an aging prostitute. But it is actually the voice of an era gone by, of a village which has be transformed into a town. The story is stiched in an old-fashioned way of story-telling, bit by bit, scene by scene, with a villager’s eye and ear for the changes that have happened, the destruction it has wrought. The lives of the four protagonists in the story are interwoven into that of the village. You have to listen to this novel as you read in order to get the true flavour of it.

Are there any new writers and poets that have grasped your interest?

There are many. I like the work of Hilary Mantel, Jonathan Franzen and Mohammed Hanif. I’m always on the lookout for good writing and if I pick up a mediocre book, I rarely finish it.

I’m a writer and will write no matter what the mode of printing is. I am not at all comfortable in the new, breathless, glitzy world of quick-sell and it is difficult enough to keep my sanity when I am surrounded by it. But luckily we live in rural Karnataka and so I can hide for as long as I wish. And write the way I want. But it would be foolish to shut my eyes to reality and ignore the developments. I wait and I watch. And hope that Art survives.

There are many unhealthy trends, as you can see. In a publicity-driven world, writers too are asking for ‘celebrity status’ and killing themselves, literally, by rushing around ‘net-working’. You need to promote yourself a little bit maybe but not the way it is now. I believe that in the end, merit will survive.

It is still trying to get there. Honestly, I don’t think we have done anything to be proud of, we haven’t produced great writers.

It plays a very significant role in taking literature to various parts of the country and in giving regional language writers the credit due to them. There is some wonderful writing going on in many languages and thanks to good translations, we are able to read them. Sahitya Akademi should always aim to work towards sustaining merit. Which I hope is what it is doing.

I am writing a non-fiction book on health care in India. I am also thinking of my next novel.