Chitra Banerjee Divakaruni is an award-winning and bestselling author, poet, activist and teacher of writing. Her work has been published in over 50 magazines, including the Atlantic Monthly and The New Yorker, and her writing has been included in over 50 anthologies, including The Best American Short Stories, the O.Henry Prize Stories and the Pushcart Prize Anthology. Her books have been translated into 29 languages, including Dutch, Hebrew, Bengali, Russian and Japanese, and many of them have been used for campus-wide and city-wide reads. Several of her works have been made into films and plays.She lives in Houston with her husband Murthy and has two sons, Anand and Abhay, who are in college.

Born in Kolkata, India, she came to the United States for her graduate studies, receiving a Master’s degree in English from Wright State University in Dayton, Ohio, and a Ph.D. from the University of California, Berkeley. She currently lives in Houston, Texas, which has begun to appear in her writing.

Divakaruni teaches in the nationally ranked Creative Writing program at the University of Houston, where she is the Betty and Gene McDavid Professor of Creative Writing. She serves on the Advisory board of Maitri in the San Francisco Bay Area and Daya in Houston. Both are organizations that help South Asian or South Asian American women who find themselves in abusive or domestic violence situations. She served on the board of Pratham, an organization that helps educate underprivileged children in India, for many years and is currently on their emeritus board.

Two of her books, The Mistress of Spices and Sister of My Heart, have been made into movies by filmmakers Gurinder Chadha and Paul Berges (an English film) and Suhasini Mani Ratnam (a Tamil TV serial) respectively. A short story, "The Word Love," from her collection Arranged Marriage, was made into a bilingual short film in Bengali and English, titled Ammar Ma. All the flims have won awards. 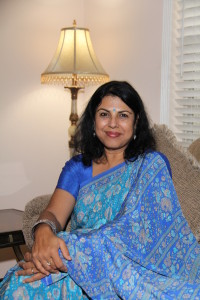 I grew up in a traditional middle class family in Bengal. I went to Loreto and to Presidency College, where I studied literature.

I read a lot of British literature when in college. Since coming to America, I have read more American literature, especially multicultural. I love reading Bengali novels, too.

I have been influenced by other Indian/ Indian American writers as well as multicultural writers. Women have had a special impact on me. Writers such as Amitv Ghosh, Bharati Mukherjee, Anita Desai, Rabindra Nath Tagore, Bankim Chandra, Sunil Gangopadhyay, Suchitra Bhattacharya, Maxine Hong Kingston, Margaret Atwood, Cristina Garcia and Toni Morrison have influenced me.

I like reading, watching movies, playing scrabble and chess, going for long walks, spending time with family and working out in the gym.

Keep at it, don’t give up. Getting published sometimes takes a lot of effort and time. Meanwhile read widely, develop a regular writing habit, revise carefully, and if possible join a writers group so that you have good people giving you feedback.

Some years after I immigrated to the US. I wanted to chronicle the immigrant stories of women as best as I could. Arranged Marriage, my first collection, came out of that.

They can if used wisely. The internet is a two-edged sword.

Which aspects of your writing readers in general and Research scholars in particular must discover and explore?

Some areas are: my use of mythology, my analysis of changing women’s roles, American life, immigrant life, multigenerational family relationships.

Tell me about Oleander Girl

Oleander Girl is at once an adventure tale and a mythic quest in search of self. There is a secret at the heart of the book. But it’s also a novel about the changes occurring in India, and the clashes between traditional lifestyles and the global lifestyle. It moves between India and America, portraying the post Godhra conflicts in India and the post 9/11 problems in America.

Do you believe that all your novels are buildingsroman? i found most of your protagonist’s journey towards perfection.

Not all of them are bildingsromans. But Oleander Girl certainly is–it's korobi's hero's journey. May be Sister of My Heart also.

Good readers are surprisingly similar, no matter what country they come from. They are sensitive to the nuances of characterization and irony. The knowledge base is a bit different, and sometimes what they like best about the book is different. For instance, US readers love the India parts of my novel best. Indian readers love details of immigrant life.

What is the reason behind your choice of mythical women characters?

From an early age I am fascinated by myth, fairy tale and folktale. They are resonant & timeless.

I found juxtaposition of culture in majority of your novels. if i am not wrong human being is always curious about the counter cultures. as you said Indian readers are fond of immigrant life and European are fond of Indian way of living, how would you balance both the cultures in your novel, especially when you are dealing with mythical character.

That is the challenge in the mythical novel. Another challenge: how to create a sense of that ancient magical world and yet make it timeless and contemporary, full of issues of importance to today's reader.

To what extent are your women characters autobiographical?

Not really autobiographical at all. Their lives are far more exciting than mine!

Are there any new Indian writers and poets that have grasped your interest?

So many. I recently read a novel by Sandip Roy, Don’t Let Him Know. It is, among many things, about the gay experience.

I am fine with whatever allows a reader to access books easily. I see us moving more to e books—I have started reading them more and more. I like the fact that they conserve trees.

Exciting lit scene in India! So many new writers. I was at the Jaipur festival some time back and was amazed at the large and enthusiastic crowds.

I think they have made many people aware of books they would not otherwise have known about. They are doing important work

I am working on a collection of linked stories (a novel in stories) about 3 generations of a family of women. Next is a novel based on the Ramayana, from the perspectives of women.

What is your recent proud achievement?

Recently I was included by the Economic Times in their list of 20 most influential global Indian Women. That was very exciting!