Anita Nair is a prolific Indian Writer in English, who has been writing novels, short stories, poems, essays, children’s stories, plays, travelogues and editing works since 1997. She is best known for her novels titled The Better Man and Ladies Coupe.

Anita Nair was born at Mundakottakurissi, near Shornur in Kerala. Her works of fiction have been translated into 21 languages. She studied in Chennai before moving back to Kerala, where she obtained a BA in English Literature. She worked as the creative director of an advertising agency in Bangalore. It was at this time in 1997 that she wrote her first book, a collection of short stories titled Satyr of the Subway. The book earned her appreciation and she also won her a fellowship from the Virginia Center for Creative Arts.

In 2002, Nair brought out a collection of poems titled Malabar Mind, and in 2003, she brought out Where the Rain is Born – Writings about Kerala which she had edited. Anita Nair´s second novel Ladies Coupé (2001) was an instant hit and is remembered and widely read even today. 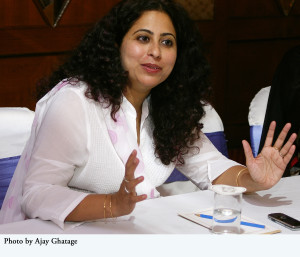 I was born at Shoranur, a little railway town in Kerala. However Mundakottakurissi is my ancestral village and I have very strong roots there. My family now lives there and I spend a part of the year there as well

I was fortunate to be part of a family where I was greatly loved and cherished. I did pretty much everything that girls of my generation in the western hemisphere was doing at that point of time. With one small difference. While I had all the freedom to do what I want, I was expected to also remember that as a girl and a woman, I would have to fulfil my womanly duties or it would reflect on the family and how I had been brought up.  I remember one story my grandmother used to keep telling me when I was growing up–there was this girl who had got married and was sent back to her parents because she didn't know how to cook! It was a cautionary tale that suggested – put down that book you are reading and come help out in the kitchen – but I don't ever remember her telling me the importance of things like knowing how to change a light bulb, for instance. This very same grandmother was a strong woman otherwise. A perfect role model. She was married at twelve as was the custom those days and went to live with her husband when she was fifteen. By the time she was twenty six she had taken on the reins of running the family. My grandfather worked in the railways and was away mostly. It was she who brought all six children up, made sure they had a well rounded childhood and education and built a colony of houses and looked after the agricultural lands, the farming etc. She was capable, practical, artistic and fun.

I was indiscriminate in my choice of books. So I read anything and everything I could lay my hands on. As of now, I am reading Ben Okri’s

I believe that every book I have read has influenced me. Either I learnt how to or how not to. It is a process that continues.

I sing [ I am studying Carnatic music]; I swim; I go to the movies; I cook…

Write. And write from your heart rather than emulate a successful or even a writer you are particularly influenced by

When I was twenty five, I suddenly found myself out of a job. The advertising company I worked for was taken over by another group and the all the previous employees were made to feel so uncomfortable that most of us left…. My uncle who lives in New York invited me to go stay with him and so I went to Manhattan. Most people when they travel have an agenda; they are either tourists or are there on business or visiting family…. I was doing nothing. All I did was walk through Manhattan and later travel through the length of the USA, searching for god knows what but when I came back to India, my mind was formed about what I wanted to do. It took a while but when I was about twenty seven, those months of introspection revisited me and one day I began writing. I wrote the first three paragraphs of Satyr of Subway and I knew for sure that I had finally stumbled upon a voice. It was unique because it was mine and I sensed that this is what I would always do and write. That my writing would be character driven and story oriented….and yet it would need to derive itself from an abstract. My writing would seek to give abstract concepts a tangible and perceptible form.

I think it helps makes books and writers popular

I wouldn’t know. All I do know is that research scholars have been studying my work from very different perspectives – feminism, caste, family dynamics, etc

Tell me about Idris: Keeper of the Light

It is a historical fiction set in medieval Kerala and is different from all my previous books. The year is 1659. Idris, a Somali trader, is in Malabar to attend the Zamorin’s Mamangam festivities. Everywhere he goes, his jewelled eye evokes a sense of wonder and incredulity. Then, by a strange twist of fate, Idris meets his nine-year-old son, Kandavar, born of a mysterious midnight tryst in this very land. Anxious to remain close to him for as long as possible, he joins the Nair household headed by Kandavar’s uncle, and is charged with a crucial task: of distracting the boy from his dream of becoming a Chaver, a warrior whose sole ambition is to assassinate the Zamorin, in a tradition whose beginnings have been lost in time.In an attempt to stave off the inevitable, Idris embarks with his son on a voyage that takes them from Malabar to Ceylon, and from Thoothukudi to the diamond mines of Golkonda, where he meets the queenly Thilothamma, as solitary a being as he is. Will the mines reward him? Will he find the strength to leave his new-found love and journey back to his son’s land – and to an uncertain future? You will have to read the novel to find out what happened next… But let me tell you that along with the story line packed with adventure and passion, Idris: Keeper of the Light is full of fascinating insights into life in the seventeenth century.

Are there any new Indian writers and poets that have grasped your interest?

I don’t think it has progressed as it should have.

I am working on the second novel in the Inspector Gowda series. I am also working a book of stories for children and am compiling a new volume of poetry. I have also set up a writing academy and this is my most exciting non-literary project as I hope to be able to help writers find their true voice.  Sometimes this is the first hurdle for a writer- to know where their true forte lies. The academy is called Anita’s Attic and began in January 2015. I don’t work with more than twelve writers at a time and this will be over a period of 3months which would enable me to provide mentorship on a one to one basis over a sustained period.