Utpal Datta is a National Film Award-winning film critic, long associated with Bismoi, an entertainment Assamese magazine, Rangghar- cultural monthly and Roopkar-Cultural Monthly and later joins the All India Radio Guwahati, where his book 24 Frames (2008), an anthology of articles on Indian cinema, was released as a radio program.

For few years he represented Assam as a special correspondent to Cinema India International. At present he is working with All India Radio at Guwahati station, the public service broadcaster of India, in the capacity of Programme Executive. He has served AIR stations like Dibrugarh, Nagaon, Williamnagar, Haflong and Guwahati. He is married to Namrata Datta, a writer and research fellow and both of them stay at Guwahati with their daughter Ragamala. He has directed one Impressionistic Short Film By-Lane2 based on works of Noted Assamese Film Journalist PABITRA KUMAR DEKA. The film has been selected for several Film Festivals and for Indian Panorama 2013. His second film is THROUGH TRUST AND FEAR based on philosophy of an eminent Assamese writer NIRUPAMA BARGOHAIN. This film was produced by Mihir Goswami. After this film he made another film – BORGEET – Eti Dhrupadi Ratna based on Borgeet of Assam.

1. His first published book was Ami Kene Aacho, a short-length play written for environmental theatre. The theme of the play was youth unrest set in a small-town environment. 2. Then he tried to explore a new ground for his writing with a travelogue Aparupa Andaman, which first appeared in one of the leading Assamese journals PRANTIK and later came in a book form and was marked as an instant hit. 3. Then he came with his novel Naishajatri based on day and night life of working women of Guwahati. That book was also a hit for his unique writing style and contemporary theme. In this book he used style from film, radio play and journalistic prose to find out his own way of expression. 4. Mozartor Swaralipi is his only detective novel, later adapted to radio play and TV serial in Assamese and Hindi languages. 5. Though he is primarily known as a film critic and his first book on film writings came vary late. His first book on film study is Chalachitra, an anthology of articles written on various aspects of film of the State and the country. The book was published by one major publisher of the state, Lawyer's book stall. 6. Ki Naam Ei Premar – a novel, based on a real-life love story 7. Maramar Neha – Novel written in a format of letter, translated into Bodo Language also
8. Cine-Quiz – an descriptive quiz book on film

1.     Original Play – Godmother, based on women in politics – staged by Hengool Theatre

2.     Adopted play – Kanchan – based on sexual harassment on women in office, staged by Hengool for two continuous years, one of the major play in touring professional theatre of Assam 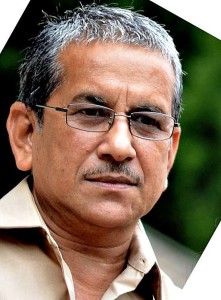 I have passed my childhood and youth in a sleepy small town called NALBARI (Assam). I did my graduation from Nalbari College. Later I joined Cotton College of Guwahati to peruse Post Graduation degree.

Books are my closest friend since the day I could remember. We had a personal library as my grandfather was an avid reader and he has tremendous respect to books. My father was also a writer and translator. Virtually my growing years were passed mostly in company of books. I had no specific choice, I loved all printed words, even today I feel myself as a child while I touch a new book. Right now I am reading few Assamese books, a collection of Hindi poems by Biswanath Prasad Tiwari and few English books. The English books on my study table are – 1. Uneasy Neighbours by Ram Madhav, 2. The Politics of Hindi Cinema in the new millennium by M K Raghabendra, 3. On the wings of Music by Shantanu Moitra

I have so many favorite authors in four languages I read. And there are several other authors whom I read in translation also. The list of favourite authors is endless. Yet, my bed-side book is Chanakya’s Arthshastra. And to speak about the impact, all books I read are parts of my growing process as a reader and that reader controls me, shows the path, inspires and provides power to think independently while I try write something.

I read, I chat with friends, I watch film, I drive, I go for photography, I quarrel with my daughter and above all I do some household works to help my wife (though I can hardly satisfy her).

How can I? I am still learning.

Can you describe the time when you first realized that creating was something you absolutely had to do?

I remember, while I was a student of lower class, I found few books where my father’s name was printed in the cover page as the author. That inspired me to see my name in print.  So, while I was a school student, I used to send sketches to the children page of a Daily News paper. One fine day I have discovered my name in that said page along with my drawing. It was a moment of success and achievement. Later I tried my hand in  camera started sending photographs to some news-paper and magazines. My first photograph was published in ASOM BANI, the leading Assamese weekly of that time while I was at class IX. In my college days I used to send my writings for AIR and those were accepted. AIR has offered a good amount of money to the talkers which a great force of motivation. I also wrote for some govt publications and earned a good amount of money. I opened up a bank account to deposit my earnings and later I purchased my first Flash Gun from that gathered money.

Yes, I feel internet and social media had helped the writers to get touched with a large number of readers. I meet several important authors and translators via social media and I have translated some of poems and other writings into Assamese. I do not know whether those translations have any importance in perspective of Assamese  literature or not, but I found those interactions very stimulating.

Which aspects of your writing reader in General and Research scholars in particular must discover and explore?

I do not have a huge numbers of readers of my writings. Sometimes I used to meet someone who has gone through some of my writings. One day one stylish model said – Sir, I read some of your novels and criticisms, you write for the up-market, I love this. Some readers also inform me that they like my content, language and style. What else I can ask for? I wrote only few research papers and I was informed that some people liked my interpretation and observation.

I cant say, but I tried to construct may plays violating all prevailing structural patterns. I always concentrate on the sub-text, imagery and multi-layered structure. My first play “Ami Kene Aso” (How we are passing our days) was written for a small theatre group. My first concentration was on its production cost- how to minimize it. So I had to depend on its verbal beauty. I relied mostly on dialogues. My second play was a full length drama, written for a professional theatre group. The theme was based on politics of power. The opening point was based on a real political killing of my district. It was written in the pace of a thriller, scenes were constructed like a film screenplay and dialogues were written like a radio play. It was an experiment and audience made the drama a superhit of that year. My 3rd play was based on a novel by Anuradha Sharma Puzari. The theme was sexual harassment in office. I took the theme and re-construct the story according to my need, the need of the production company. It was produced as a low budget production but was a hit and was being staged for two years continuously. This play is considered now as a ‘cult-play’ because of its content and narrative. After 12 years I wrote another play based on the same novel. This time the play was planned as stage adaptation of the novel. A non-professional group staged play and made it a success.

Modern Indian Theatre is growing with translation (translated plays). The theatre groups are facing problem of good plays and they solve the problem with translated and adopted plays, plays from regional languages or also from non-Indian languages too.

Recently I have watched a Hindi play, title ‘Koi Baat Chale’, written by Ramji Bali and I found the narrative is unpredictable and grasping. But is it always tough to find a script with great philosophical depth..

This is an era of computer and internet. I feel in this era, eBook will occupy the lion’s share of printed books. But personally I am not comfortable in reading eBooks.

Contemporary Indian Writing in English is controlled by book publishers. Good promotion makes a book ‘hit’ like a Bollywood Masala film. We hardly found any thought provoking element in modern Indian English writings. Of course, this comment is confined with fiction only.

What projects are you working on at the present? And what do your plans for future projects include?

At this moment I am translating an anthology of poems by Dr Ratan Bhattacharya. It is in final stage. I have three books in my hand for review. Besides that I am adopting one of my novels into radio play and working on a screenplay for my next short film. I am also planning a coffee-table book with my photograph.

At the end I wish to say that reading, writing, translation, photography, film-making – all are worship of beauty and humanity. I cannot find any differences among those. I love and practice all those as one as a whole.